Project
As you know, I have decided to modify an aluminum external pack frame, from the '70s, using military equipment.


Straps, Rucksack
In the military, at least these United States' Army, every box is labeled with its contents, with the noun first, so a box of soft toilet paper would say, Paper, Toilet, Soft. A box of pepperoni pizza would say, Pizza, Pepperoni. 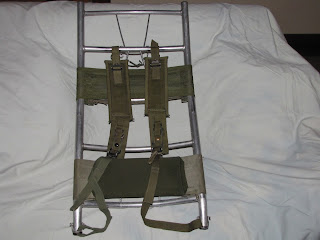 Of course, I'm chiding myself for failing to get pictures of each of the rucksack straps attachment points because I will probably need to wrap the bottom ones with electrical or duct tape. It seems the mounting bracket might be too sharp, so it could cut the pack straps. 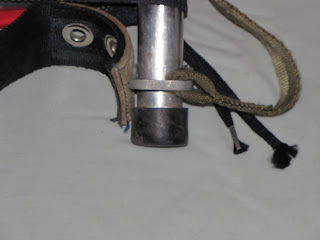 Oooh, I have a picture from the previous photo shoot. See what I mean?

You pay full price, but you don't get all of it.

I plan to replace the civilian top and bottom mesh pads with military cushioned pads.

You guessed it. They are called 'Pad, Back, Lower' for the bottom one. 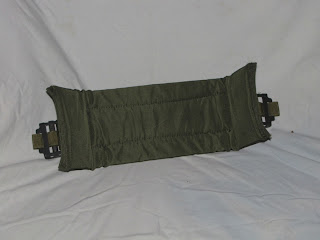 Lower Back Pad
Actually, everybody calls them kidney pads; even though, they aren't anywhere near the kidneys when you carry a rucksack. Go figure.


Failure
O.K. It was a good idea, but the lower back pad strap is too short. It won't wrap around the bottom of the frame, like the existing mesh.

The pad's attachment points don't line up with the frame, either.

Here are some pictures of a rucksack frame I have had since ... Ha, Ha, Ha, you thought I would tell you.


This picture shows the side where the pack will be attached.

Notice, the cross members are riveted, not welded like the civilian frame.

This side is the side that has the pads and straps.

Notice where the two pieces cross. That rivet is usually broken because troopers sit on their rucksack

A side view of the frame.

Again, notice how all of the parts are riveted together, making it easy to repair or replace parts.

Cool, ... Especially when your military owns a few million of them.

When I initially commented I clicked the "Notify me when new comments are added" checkbox and now each time a comment
is added I get four emails with the same comment. Is there
any way you can remove people from that service? Appreciate it!