The Ultimate Form of Transportation
Humans have walked on every continent of this planet. All we have needed are sturdy shoes and appropriate clothing.

Or, ... They see the expensive SUVs, with just the driver, speeding down the highway during rush hour.


Well, ... They are gas guzzlers and only the larger trucks can carry four or more people, better known as crew cabs. Plus, the larger the trailer the wider the turning radius for the truck and trailer.

If you have ever seen an 18 wheeler do a u-turn, you know what I'm talking about.

Oh, they are expensive, too.


Small Cars or Hybrids
Some folks think the hybrids cars or smaller automobiles are the best. They have awesome fuel efficiency; some getting 50 to 100 miles on a gallon of fuel.

Of course, ... They have a problem. They don't have a large space for supplies for your family's  emergency evacuation supplies to your relatives' or friend's home after an event.


Goldilocks
By now, you're probably thinking that I'm telling your the story of Goldilocks. I am because the perfect emergency evacuation vehicle is the ...


Four Door Sedan
When it comes to the 'best' emergency evacuation vehicle, the 'best' is probably the four door sedan that you see everyday on your drive around town.

These automobiles are numerous and inexpensive. They can hold a fair amount of supplies for a trip. They can also easily hold four adults or two adults and two car seats, depending on your situation.

The four door sedan also allow everyone in the car to easily get out of the car, at the same time.

The mid-size four door sedans also get good fuel mileage, usually in the low to mid 30s. They don't stick out, shouting Prepper! or Survivalist! like the Hummers, lifted 4-wheel drive trucks, or other speciality vehicles that some recommend for you and your family.

These sedans are also smaller then the big pick-ups, making them easier to maneuver through tight spots and around obstacles. Their design will also prevent you from trying to take your family 'four-wheeling' during an event, possibly getting stuck in the mud and dooming your family to a slow walk out of the danger area because you have been working, to pay off the expensive truck, instead of practicing your skills.


My Vehicle
We own a 1997 Honda Accord. It is a 'mid-size' vehicle that is my daily driver to work and my 400 mile drive home, twice a month.

It usually averages just over 30 miles per gallon on the interstate where most of my driving takes place. 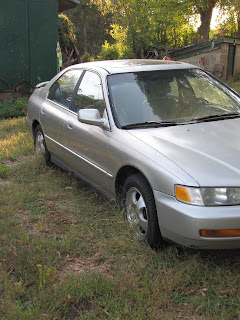 As you can see from the photo, the Honda is a neutral color that most people will never notice. You also probably notice that the car's finish looks a little ratty. What criminal would risk breaking into a beater when they can break into a new, expensive Hummer, parked next to me? 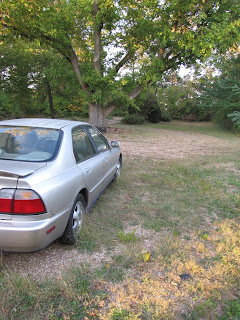 The car's trunk conceals your emergency supplies, so no one is the wiser about your preps. Try that in the bed of a pick-up truck!


P.S.
Yes, I know the above photographs are strange, but it was a pretty good attempt at OPSEC. Plus, we sold it a few weeks ago ; - )


We're Different
I have talked about my brothers in the past, Spartan, Scout, and Jumper. Each family has a different method of getting prepared.

Scout lives close to 'Nuclear Strike Target #1,' better known as Washington D.C. His family's plan, during an extreme event, is to send his partner and children to our home with him following after wrapping up business.

So, ... They prepare differently then Jumper and Spartan. One of these differences is ... 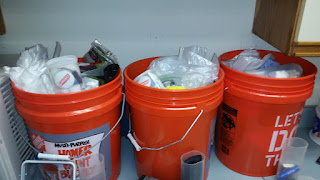 What's in the Buckets
According to Scout, the buckets contain:

In the buckets are bare essentials.

Reasoning
Now, there is a reasoning for storing their supplies in a five-gallon bucket ... The buckets keep the supplies dry and organized. Plus, the emptied buckets can be used for carrying water, food and for body waste.

Extra
Of course, these aren't the only supplies; Scout and his family have for an event. They also have another bag prepacked with extra clothes.

If they have time, they plan to use ice chests or coolers to hold more food. 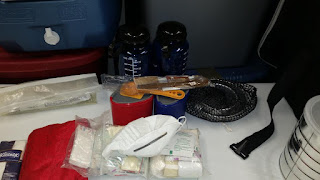 Layers
You may have noticed that Scout packed his family's supplies in slide-lock plastic bags (ziplock baggies) and other smaller plastic containers. This provides organization and protection for the supplies.

Lastly, the plastic baggies allow the perishable supplies to be grouped so restocking the five-gallon bucket is easier and faster to deal with.

Reasoning, Again
Needless to say, Scout and his family have a reason for being prepared. They live in ... a tornado and hurricane area, so they have to have what they need ... quick.

Email ThisBlogThis!Share to TwitterShare to FacebookShare to Pinterest
Labels: Fridays


According to Katniss ...
We are three months behind schedule on getting the house fixed up, so we can move in.

Well, ... There have been some things we didn't plan on.


Of course, Katniss is working, so the simple task of looking through every drawer, in every box, in every potential hiding place has been taking longer than expected.

So, ... For all you parents out there. Go through your 'stuff' now and trash the trash, give away the junk, sell the excess furniture, make a list of where all the valuables are stored, and ... get organized. Your child will appreciate it, after you're gone.

Oooh, .... Please, Please, Please write the names of everybody on the back of those old family pictures  because your children aren't going to remember : - (


The Ceiling
I learned a new term since we started this project, ceiling/floor joists. Yeah, they are the ceiling joists between two floors.

It seems, ours needed to be updated, so we hired a group to come in and add another set of joists. The carpenters applied glue then lag screwed the new joists to the old joists. This made the ceiling level and the upstairs floor very rigid.

The Floors
At first, we weren't going to pull up the floor, but we had a problem. The floor had a dip, a big dip.

So, ... off came the floor. First, one layer of plywood then a layer of roofing felt, exposing the original wooden floor. Yeah, it was messed up, so we couldn't reuse it.

So, ... That came up. A day later and two very good size blisters, we could see 'new' problems and some potential upgrades.


The Ventilation System
Since the ducts go through an uninsulated crawl space, it was a no brainer to 'upgrade' the ventilation ducts with insulation.

Of course, I talked with the electrician (His family also does ventilation) about doing it. He said it was a good idea, just understand, the return on investment was like ten to twenty years ; - )

Now, this is where YouTube comes in. I was able to watch a couple of videos to determine the best way to do it, for our situation.

Hopefully, this will warm the house better and reduce the $400 a month fuel bill.


Insulation
As I'm crawling on the dirt floor, getting very dusty, installing the ventilation system insulation, Katniss is cutting rigid foam insulation to fit the spaces between the joists around the band board. This will help keep the house warmer.

Originally, we were going to use some fiberglass batt insulation, that I had laying around, for this project.


Vapor Barrier
Like most older homes, from the 1890s to the 1900s, the house has a hand dug basement with hand laid rock as the foundation.

Well, ... They hit rock halfway through the dig, so the family and builders decided to finish up with a crawl space, a dirt floor crawl space.

Of course, that lets huge amounts of moisture into the basement and the great room.

So, ... Another $200 for 10 mil thick plastic sheeting to create a vapor barrier and about four hours worth of work, cutting and laying the plastic down. Two days later, Katniss spent part of the day taping the plastic to the rock, at least she tried. The tape won't stick to the rock wall, so we ended up just laying it up against the crawl space wall.

It already seems to be working. The basement's dehumidifier isn't running as long.


The Electrical System
We're glad; we opened up the floors. We found some 'hidden' problems and damage to the electrical system, adding $1.500 to the project.

First, a mouse chewed one of the wires. Luck for us, it was an older cloth covered wire that was going to get replaced anyway ; - )

We also found out that the electric hot water heater and well pump were on the same circuit, a 'small' problem. Plus, the oil fired furnace had too small of wire powering the blower, another 'small' problem that needed fixing.

Second, we are planning to up grade the heating system to a ground source heat pump, so the electrician added conduit and the needed wiring to the panel for the future : - )


Said and Done
When all is finished, Katniss and I are very glad; we opened the floor and discovered all of these potential problems. It was a lot easier climbing over the joists, ventilation ducts, and electrical wiring then slithering around on my back trying to do all this stuff, in the dirt, ...


In a two foot high space.