Before I begin, I want to review buying in a spiral for all the new folks to this blog.

You're probably doing this, but here's where the spiral comes in.

You get the idea, so, you'll understand my next statement.

For most urban and suburban preppers, combat vests and survival vests will be some of the last things that you purchase. You need to concentrate on shelter, water, food, medical, guns and ammo then tactical gear.


When I was in these United States' Army, I wore TA-50 to carry my canteens, magazines for my rifle, sleeping bag, MREs, extra clothing, land mines, antitank rockets, and all the other stuff; we took to the field. Nowadays, soldiers wear MOLLE gear for tactical operations.

Some preppers, especially recently discharged veterans, may want to use MOLLE gear.

This is the front of the Woodsman's tactical vest. Looking at the vest, starting from the top left, is a 'sticky' shoulder pad for helping hold the butt of his rifle to his shoulder. Below that are three double magazine pouches, and below the magazine pouches is a drop leg holster for his .45.

The back of the Woodsman's vest is mainly MOLLE webbing. As you can see he has a sheath knife on the vest's belt.

You can also see the adjustment straps to loosen and tighten the vest and the drop-leg holster and the drop leg magazine pouches.

Before I met the Woodsman, his plan was to carry a 9mm pistol in the drop leg holster, a .45 pistol in the cross draw holster, carry an AR-15 in his hands, a 12 gauge shotgun in a scabbard attached to the back of his vest, and a .270 rifle with a scope slung across his back.

That's a lot of fire power, too much firepower to carry.

First, I advised him to get rid of one of the pistols because a pistol is used for self-protection and to 'fight' your way back to your rifle. He didn't need two pistols, so the 9mm pistol is going to his wife.

The 12 gauge shotgun is going into his front hall closet, so he and his wife have something to answer the door with, if needed.

The .270 rifle is going back into his gun safe, so it's protected from villains and ready for next hunting season.

He was also having another problem with the double rifle magazine pouches digging into his underarm, if he carried two magazines in each pouch.

I suggested he hack his vest (since he's not carrying a cross draw holster, anymore) by adding a set of rifle magazine pouches where the velcro patch is at. This will give some balance to the vest. Plus, the Woodsman will be able to carry six rifle magazine comfortably across his abdomen, and if need be, he can add another six magazines by placing two magazine in each pouch.

Another addition, I suggested, was adding two canteens to the back, attached to the belt. The two canteens would be carried in canteen pouches with one also holding a canteen cup.

The last two hacks I recommended was to replace the pistol magazine pouch on the left shoulder with a pouch big enough to hold a couple of combat dressings, and to add a butt-pack to the back of his vest.

Lastly, you will notice that black sucks as a tactical color. The Woodsman is going to tie-dye the vest to a better colour. Hopefully he'll let me take pictures after his vest hack.

What does the Woodsman carry in his vest?

This is where his vest becomes a survival vest. The Woodsman carries a Bear Grylls Survival Series Ultimate Knife. (That's the knife that you see in the rear picture).

The knife has a fire steel, located on the front of the sheath, and a whistle. On the back, the sheath has a knife sharpening stone and brief instructions for signaling and communicating with rescuers.

Lastly, for the Woodsman, he carries a backpack, but you will have to wait for another article

Jungle G's vest is a standard U.S. Army MOLLE rig. It's official name is something like MOLLE Fighting Load Tactical Vest or some such military-speak.

As you can see the vest is in the desert camoflauge patteren. It has six magazine pouches, three on each side, Each magazine pouch can hold two rifle magazines. A small pouch, just underneath the "US" on the vest, holds a military compass.


The rear of the vest has two canteen covers (Jungle G didn't bring his canteens to the photo shoot) and a medium "butt" pack.

All of the gear attached to the MOLLE vest uses plastic malice clips or the MOLLE attachment webbing.

In this picture, you will also notice a drag handle at the very top of the MOLLE. A drag handle allows someone to easily drag a wounded comrade, out of immediate danger, if needed.

Jungle G's vest is also a combat vest, but it has more survival gear then the Woodsman's vest. 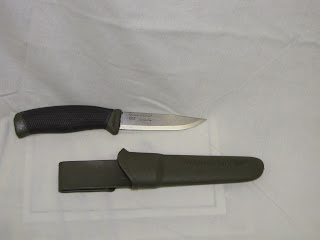 The butt pack is what seems to turn this combat vest into a survival vest. The main compartment holds a rolled up poncho liner and poncho. The outer pockets hold an emergency space blanket, to be used as shelter; a small pack of stick matches, wrapped in plastic wrap; some Ramen noodles, hot cocco, and trail mix bars, for food; and what looks like mechanic hand cleaner. 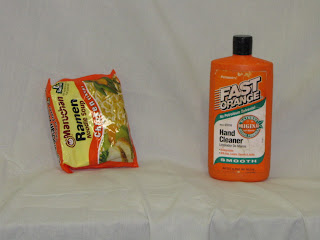 Yep, you guessed it. It's not hand cleaner. It's a bottle of hand sanitizer.

Jungle G took an old bottle, of proper size and shape, and filled it with very flammable hand sanitizer. If he needs a fire, he squirts a little one something flammable and lights with a match.

Yeah, that sounds weird, but it guarantees the fire will light, a big deal in a survival situation.

That's it for now. I'm headed to bed.


Thank you for your interesting and informative blog. I have enjoyed reading it and appreciate the work you have put into it. Here is some relevant information for you to review .
army vest sets